Play in full colour this spring in the city FORREST CHASE
Flowers are blossoming, the bees are buzzing and there’s a certain warmth in the air. There is no better season than spring to enjoy all that the city has to offer.

And as the temperature warms up, so does our city with these great activities popping up right across town for you to enjoy with family and friends.

Experience the city in full colour

This spring keep an eye on all the colourful rainbow activations that will be popping up right across Perth! You'll see all colours of the rainbow as well as activities for the whole family to enjoy in your favourite retail precincts: enex, Forrest Chase, Raine Square, 140, Elizabeth Quay, Watertown, Brookfield Place, and Yagan Square. You’re spoilt for choice with family fun activities right throughout the school holidays at Watertown. Enjoy pop up food trucks, balloon twisters, a baby animal farm, face painting and even circus performers to keep the whole family entertained. If that’s not enough, there will also be free kids arts and craft workshops, see details below: 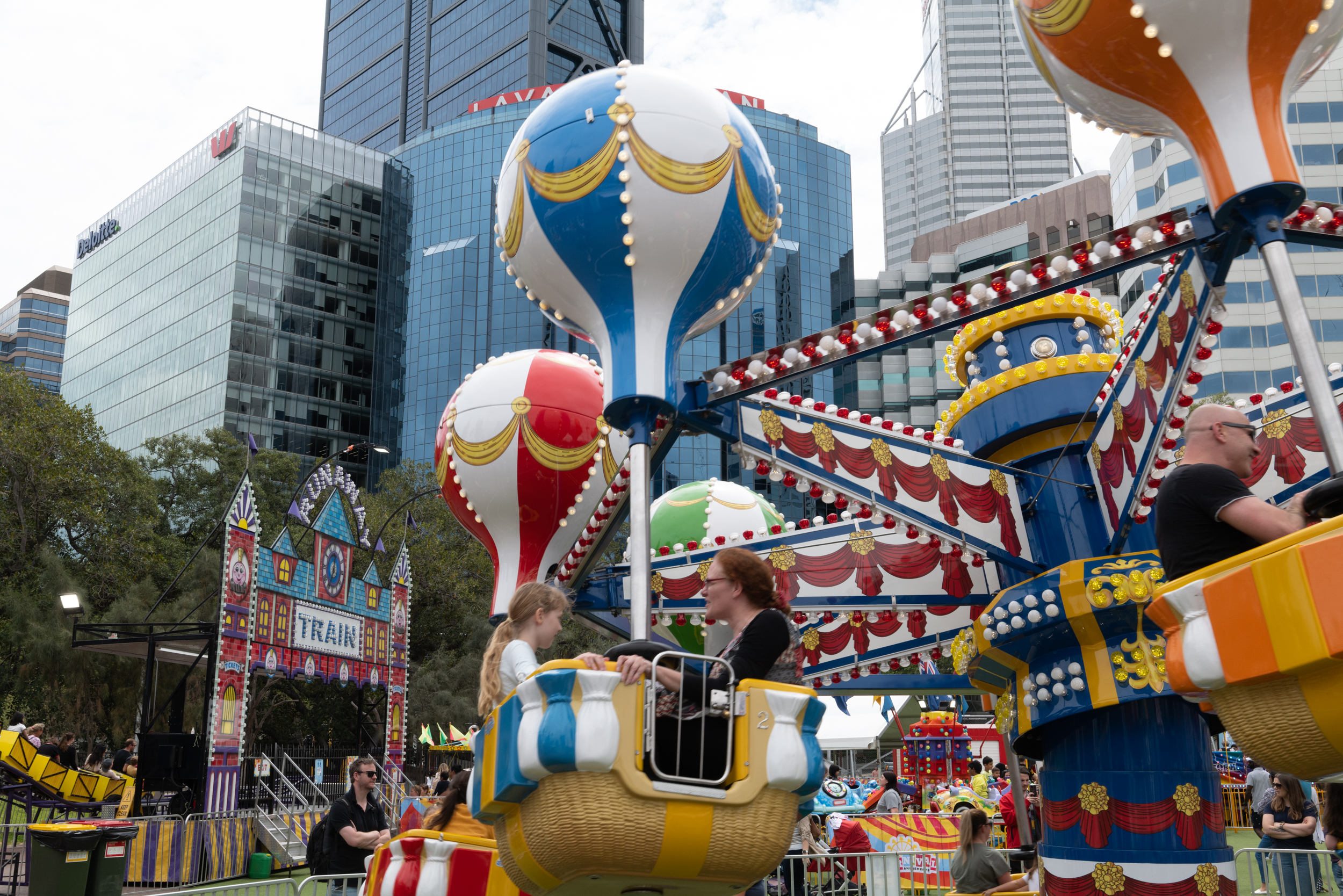 Kicking off on September 26 through 'til October 11, School’s Out Fest takes place over two awesome locations with strict capacities to ensure a COVID Safe environment.

Start your adventure at the Elizabeth Quay Fun Fair with a range of amusement rides for the young and young at heart. Next, head on up to Dino-Land at Yagan Square. Follow the maze of twists and turns to the LARGER than life prehistoric animals and insects that are guaranteed to excite and educate.

Treat the family this school holidays whilst discovering your city and supporting an event that is 100% WA owned & operated. If you want your Royal Show fix this year, then head down to Yagan Square where you'll be sure to be delighted! Bring the whole family down to enjoy your favourite show bag vendors, as well as your favourite carnival games. Perfect activity for the kids these school holidays! Free fitness in the city returns with yoga at Yagan Square. Head down to Yagan Square Amphitheatre every Saturday morning at 8am from September 26 until October 31 and let Yoga Vine guide you through a free yoga class. The sessions run for approximately one hour - BYO mat! Wild West Charters and Gusto Gelato have paired up to offer a 20 minute Eco-Adventure tour on the Swan River plus a free single scoop of ice cream from Gusto Gelato's Elizabeth Quay shop.

Wild West Charters boat tour is suitable for all ages and each tour has a possibility of a close encounter with the wild Swan River dolphins! The 20 minute tour departs on the hour from Elizabeth Quay then heads west. Upon returning, all patrons will be given a ticket to walk across Elizabeth Quay and collect a free single scoop of homemade Gelato - any flavour - from Gusto Gelato. GONDOLAS ON THE SWAN

Spring is here and what better way to celebrate than a gondola cruise on our beautiful Swan river!

Gondolas on the Swan offer gondola cruises for $50 per person for a half hour cruise starting and finishing in Elizabeth Quay taking in the stunning views of the city skyline, Kings Park and the Elizabeth Quay Bridge.

All their cruises are exclusive - so whether it's a romantic cruise or a fun group outing for up to eight people, you'll have the boat to yourself. Make your cruise extra special with a bottle of French sparkling wine for $30 or a one hour sunset cruise for $290 (including excusive hire, a bottle of bubbly, a red rose and chocolates). The perfect way to celebrate any special occasion. Convenient and accessible, and with a diverse range of take home products alongside local entertainment and food trucks, the Start Fresh Northbridge Markets will reinvigorate the Perth Cultural Centre in the lead up to the opening of the new WA Museum Boola Bardip on November 21.

Spring Deals At The Stage

The curtains are being raised again for the second act of The Stage, extending the RAC Local Lounge’s entertainment until the end of October. To celebrate The Stage’s success, RAC Arena are offering unbelievable deals, including pizza and a schooner for $15 every Thursday night, $5 house wines or schooners every Friday*, and a $10 beverage voucher included with every Saturday event ticket. Delicious new items will also headline the menu, to accompany The Stage’s growing list of cocktails, wines and beers, including loaded donut fries, and a tasty platter for two with a bottle of wine for only $45! The upcoming line-up of acts taking The Stage features some of WA’s brightest stars, such as Dulcie, Joel Jackson, Blake Rose, and Joan & The Giants.*limit of two per person, per night. Who doesn’t love a spa day? Now you can spoil yourself by enjoying their Relax and Refresh Massage and Facial for just $150, which is a saving of $50! The 90 minute massage and organic facial special allows you to fully relax and refresh into spring. Available Wednesdays, 10am to 4pm. Another fun activity for spring, try something unique and hop on a waterbike! Exactly as the name suggests, you can ride on the river – mind blown! With 1 hour and 30-minute tours available with Perth Waterbike Adventures, this is a quick and fun experience to add into your day. A must-do experience in Perth is Go Cultural Aboriginal Tours & Experiences at Elizabeth Quay, Kings Park or Yagan Square. Walter, your Nyoongar guide, will share insightful stories into the cultural past of Perth, the land of the Whadjuk people.